This post is not juicy, it’s Jucy, a post all about our experiences in the understated campervan that served not only as our wheels for the past eight days, but also our bed, kitchen, and washing up facilities while Joe and I roamed around the North Island. I know what you are thinking. How can all that living fit into a modified Toyota minivan? Could it possibly be as much fun as a Jucy camper looks on the outside? Wasn’t it great to load up a campervan and get out into it? Well, let me tell you…

First, Joe’s research prior to our departure indicated that many Kiwis holiday in campervans, so before we left the States he signed us up for a weeklong Jucy rental to coincide with the girls’ departure. As much as we love our girls, we couldn’t envision successful camping with them. But together, we figured we could make a more leisurely swing through the North if we tried it in a campervan, having moved pretty quickly through the South Island in a series of delightful Airbnbs. And so, all in, we rented the Jucy. Both of us have sailed and camped and motorboated around on multi-day trips at home, so we felt pretty confident that we could handle a few days in our self-contained vehicle. If we just parked it near the water, that might be even better. 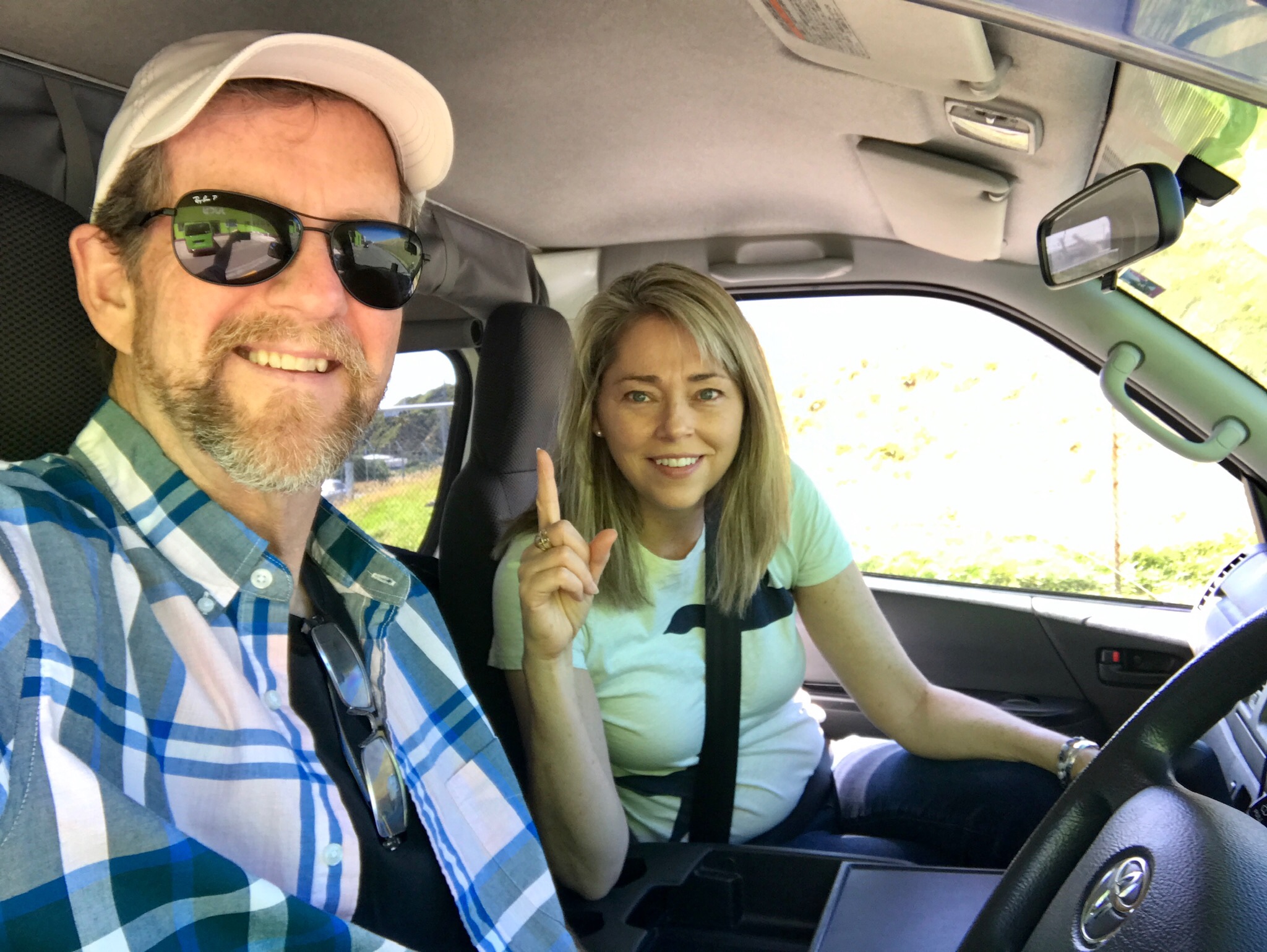 Day 1 broke bright and early. Dropped at the Jucy counter, we signed on the line, fully insuring our van for eight exciting days, the only admonishment being not to flip the thing over and damage the roof. No worries! Our first destination was a free camping site next to a river, a field touted by our guide as peaceful, flat, and conveniently located next to a hike called The Pinnacles, which Joe wanted to climb up to see. Spirits high and eager for adventure, we sped across the landscape and pulled off the road to our free site only to find a field that looked like it had been trampled by elephants. Kind of like Barnstable County Fair parking on the last day, when the crowds have driven away and even the carousel animals look tired. In front of us, the babbling brook babbled just before heading under a graffiti-tagged highway bridge overlooking an abandoned cement factory. So, no beginners’ luck here. We moved on, found a better site, struggled with the bed, and slept the uneasy sleep of questionable decision making. 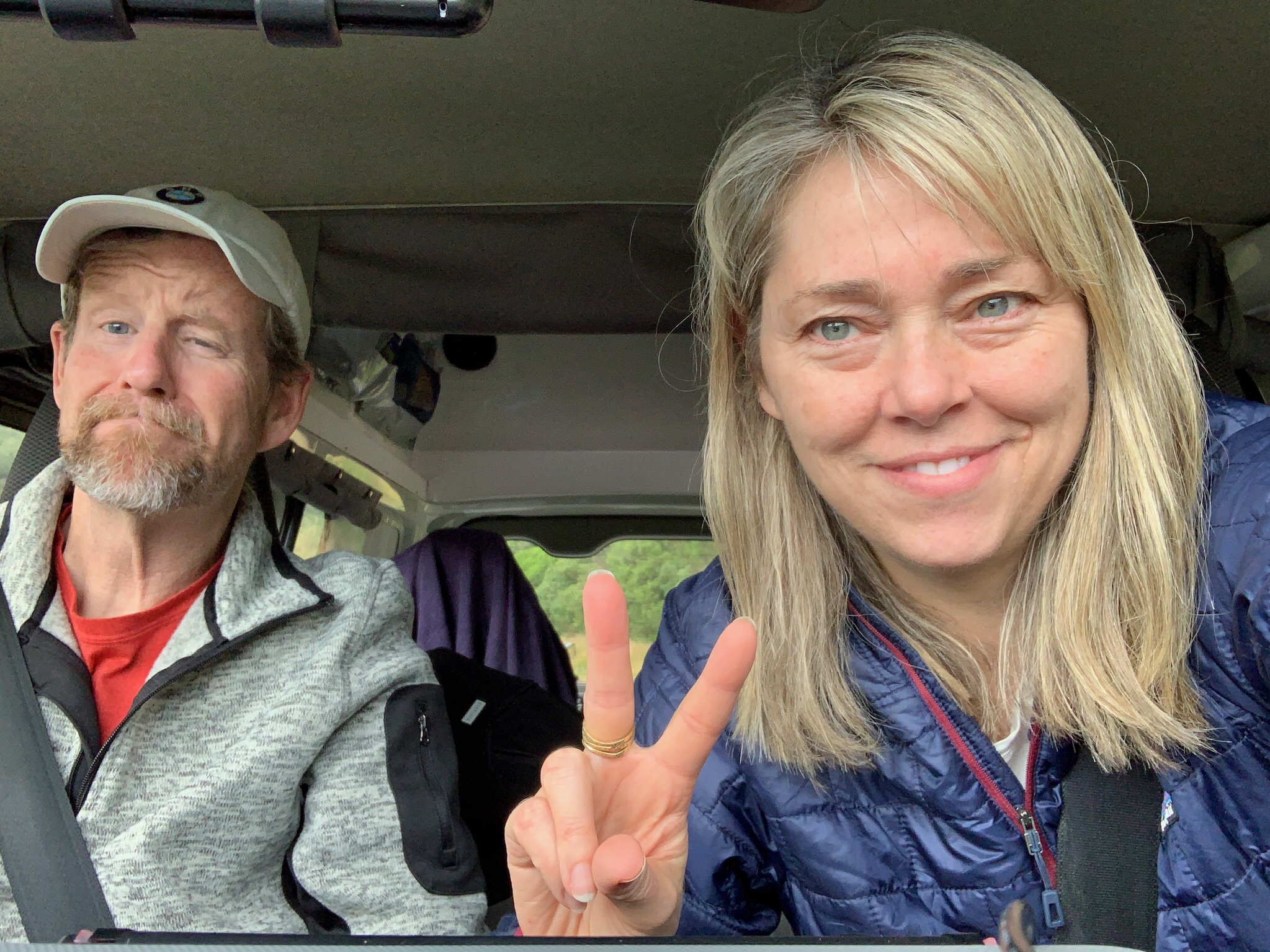 The next day, as we mulled over our choices while enjoying cups of freeze dried coffee in the spitting rain, we decided that perhaps within the confines of a holiday park lay the magic of the Kiwi devotion to campervans. Using our Lonely Planet guide, we found what was described as the ultimate holiday campground: full amenities, hot showers, a bouncy pad for the kids. Certainly, there was no chance of graffiti here! So we headed north toward Napier, a town on the eastern coast of the North Island. More beautiful driving, more cows and freshly shorn sheep, a stop at a local pottery shop where the opinionated potter wanted to talk politics. Which we avoided. We acquired a fish plate, some new pronunciations for words we know but seldom use, and landed at the holiday park in good time, asking for a secluded spot toward the back of the campground. As we settled in under the canopy of trees, Joe met the neighbors, some friendly guys who were camping while completing work in the area. Let’s just say that as the evening wore on they grew less and less satisfied with life and more eager to share their disappointments with the group. On the plus side, the exuberant philosophizing and pontificating was done by 9:30 when they all zipped themselves up in a tent. Clearly, the joy of campervanning was not to be found at this holiday park, so Joe and I made a plan to try something new. Once we survived night 2.

I was excited for days 3 and 4 because we were headed into geothermal territory, home of hot springs and geysers. I had been told that the areas around Lake Taupo and Rotorua are also very important to the Maori and that many stories are told about the origins of the landscape in this area, both the boiling waters and the fleeing mountains. I have a weakness for hot springs, medicinal waters, and the idea that healing takes place where the earth cracks and the waters bubble up. But it turns out that it’s not just about healing. That water’s also good for a 45 second corn boil, scalding the birds caught earlier that day and whisking off their feathers, and even embalming your loved ones. Who knew? Clearly, the Maori, as our guide explained while taking us through Whakarewarewa, the Living Maori Village. 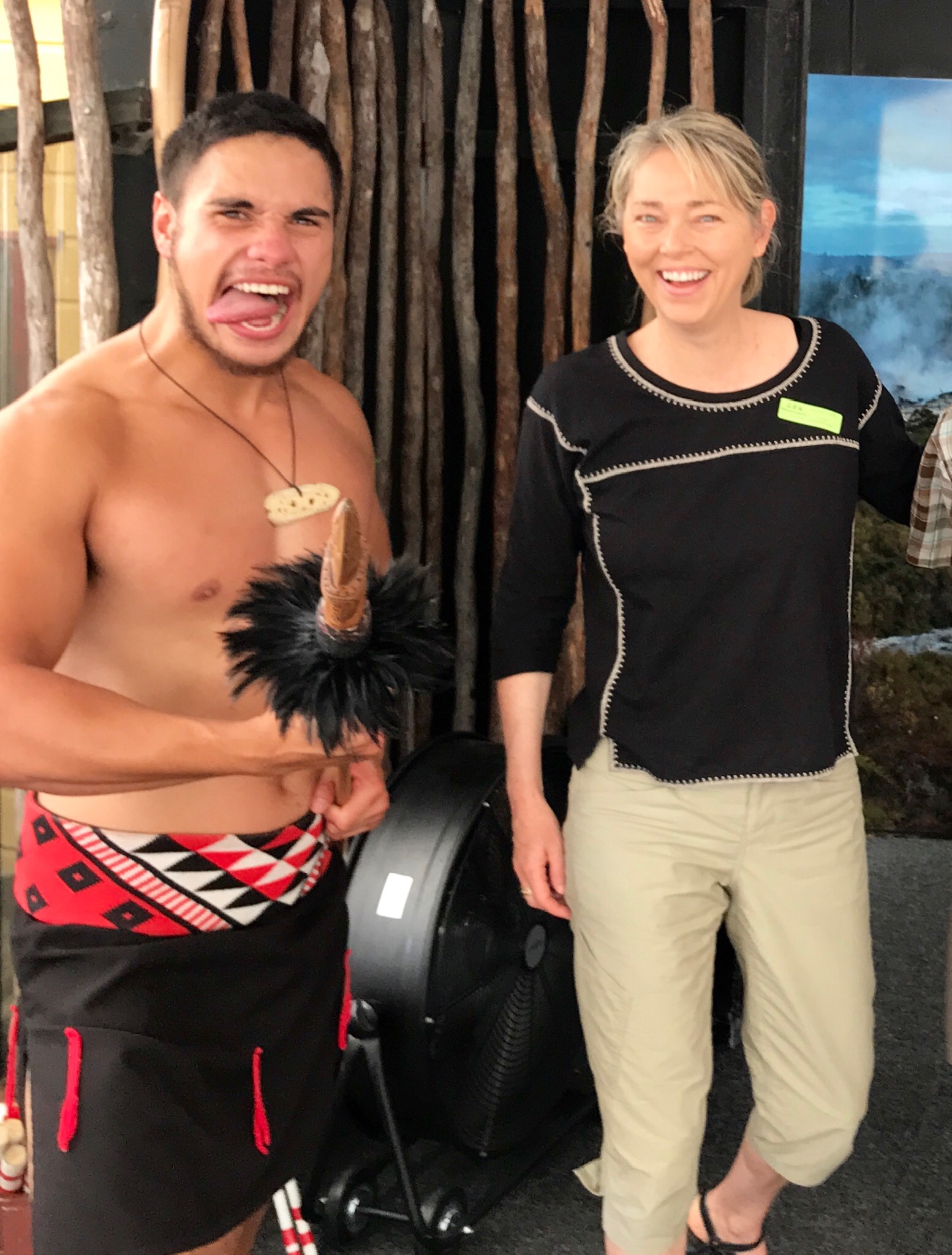 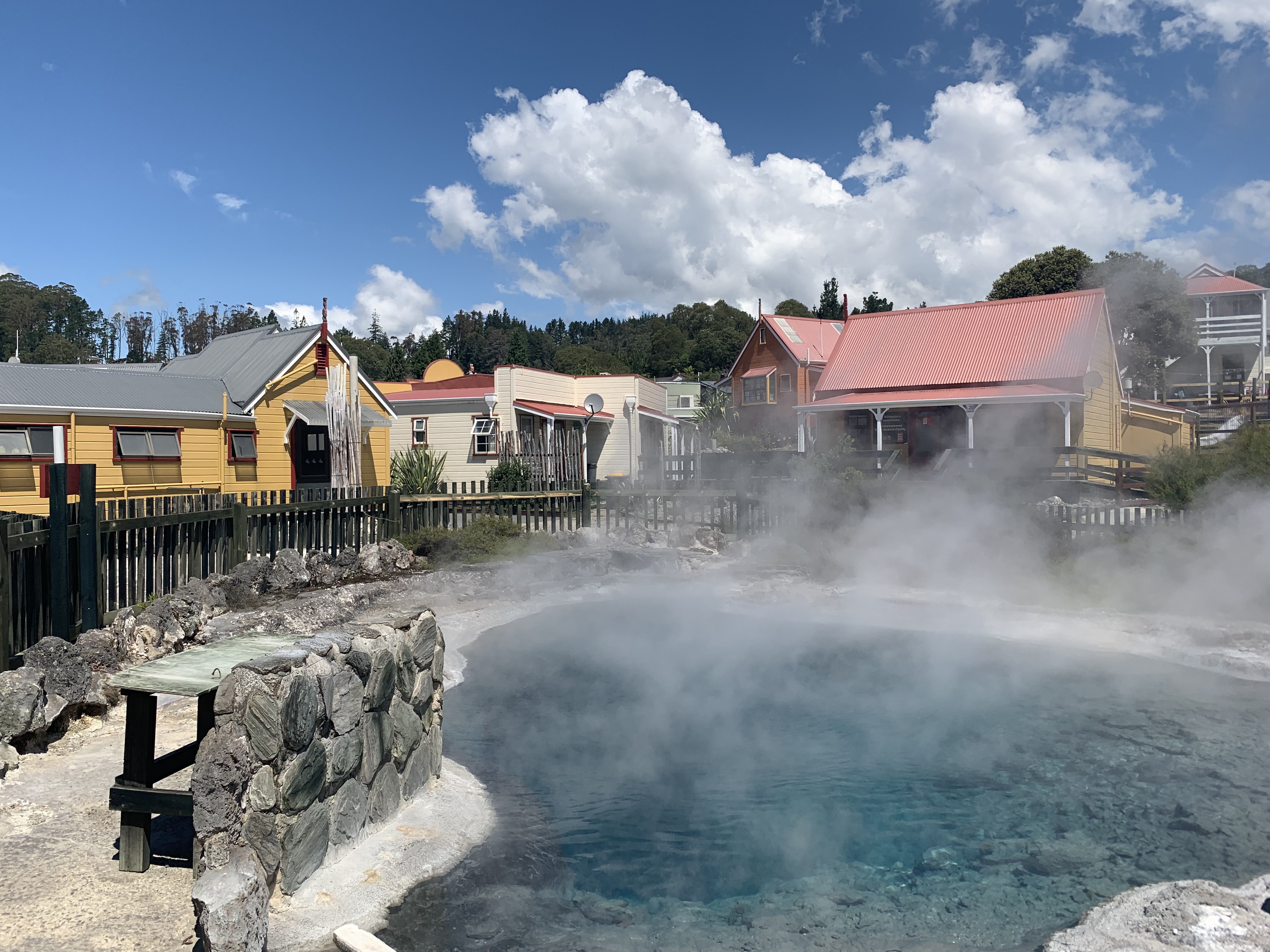 I, along with a crowd on sunburned and camera-toting tourists, witnessed my first haka, the ceremonial dance. I drew certain parallels to our living history experiences at Plimoth Plantation. Our guide did not want to talk too much about feelings associated opening up an ancestral village to throngs of tourists, though he did admit to a certain resignation about the balance between sharing traditions and keeping the sacred sacred. I’m not here to probe too deeply yet, but there are times when I just can’t help myself.

That night we parked it at the base of a mountain. In the middle of a forest. So close to a panoramic vista but buried in trees. We knew our camping skills were improving, but not so much that we didn’t hesitate for a minute before ditching the campervan the next night for a bed and hot shower at an Airbnb. We felt no shame. None. Really. Here, we met the lovely Sally, played with the New Zealand version of Tucker, our cat, picked plums off the family tree, and took a dusk to dark tour through the hanging bridges of the redwoods.

Spectacular. Revived by the company and respite from camping life, we happily hopped back behind the wheel and headed to Kawhia and the bright sandy beaches of our next campground, which was nestled on the western coast of the Island near Hamilton. We were about three quarters of the way through a counter clockwise loop of the North Island and headed back toward the sea. Visions of camping next to the ocean, waves lapping the shore, salty breezes. Kind of like home.

New Zealand is similar to home, as well, and any other place with an ocean because it experiences tides, which we hadn’t figured into our stay. We arrived to the mud of dead low tide, but were assured that we would be able to see those waves lapping the shore about midnight. When we woke from our Jucy slumber to eat breakfast, we would be overlooking the tidal flats once again. Our camping neighbors informed us that walks along the flats were interesting, which Joe did in the morning until he was dive bombed by gulls. Our takeaway from this stop was the local museum, a treasure trove of Maori history and art, and a collection of artifacts and displays on colonization. Plus, the sharing of our journey with more experienced campers who offered suggestions for our onward journey, including putting our camper’s roof hatch down before we got on the highway. 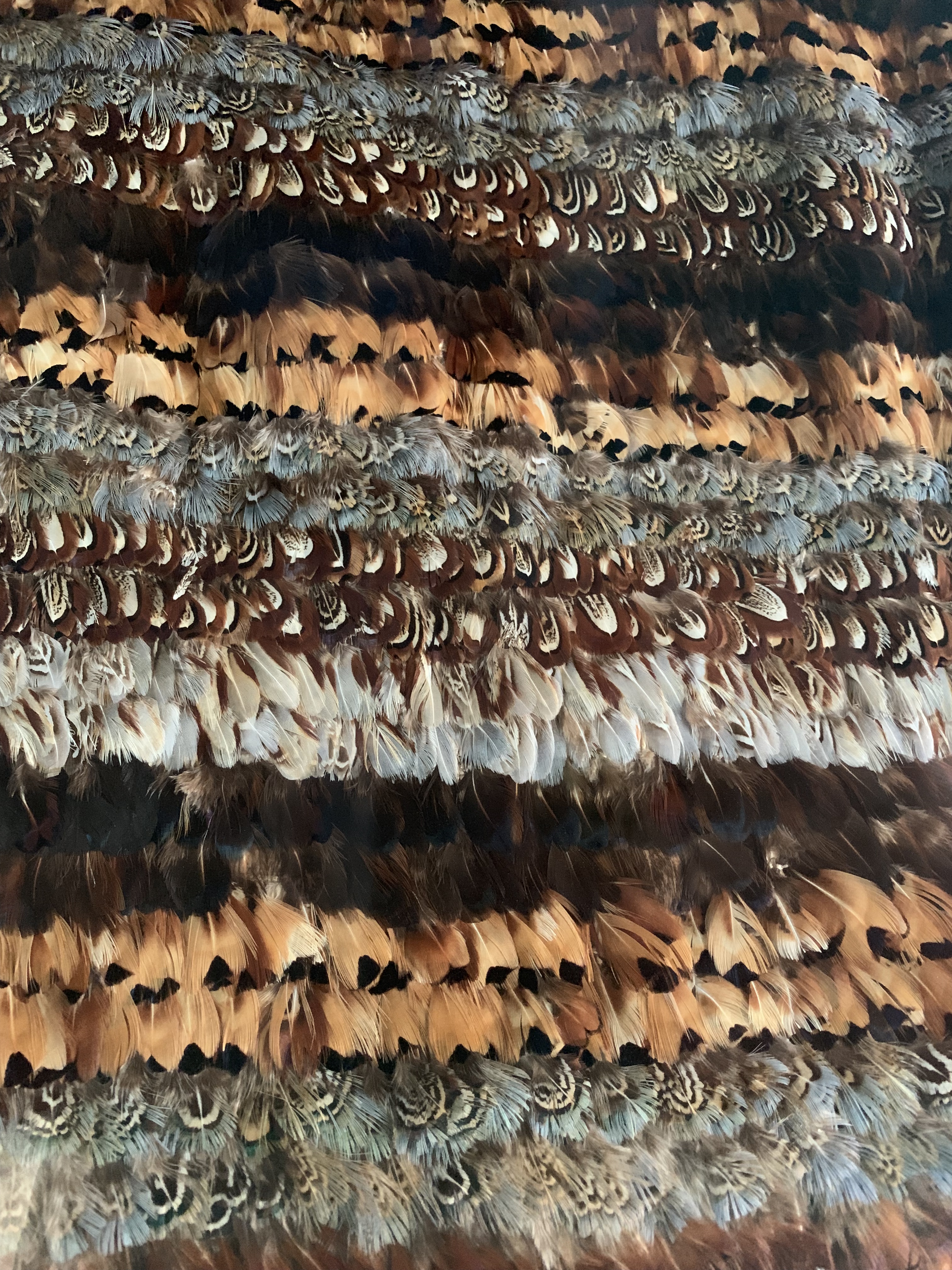 Joe struck gold the next night in South Taranaki, where we stayed at a site on Maori land operated by Phoebe, an outspoken and self identifying radical who gave me history and language lessons and listened patiently as I asked what could have been intrusive and poorly phrased questions. She was generous in her responses and offerings of Turkish Delights, as we sat in the game/kitchen/dining/entertainment room of the camp, with her one-eyed cat brushing up against my leg. The issues Phoebe identified as essential to Maori identity are strikingly similar to what I have learned about the priorities of Native Americans in the US. It’s about land and language. Passing on traditions to younger generations. Finding a balance. Much more on this later.

This site gave us the ocean we were looking for. It could have been home, save for the black sand under our toes, the light blue waves crashing into mussel-encrusted rock formations, and the fossilized oyster shells. At Te Ranatapu Ohawe, a river flowed out of the mountains, bouncing over the black sand and spilling into the sea. Phoebe reminded us that places are named for their geographic features, and this river was named because it sounds like snoring. It seemed more like laughing to me. 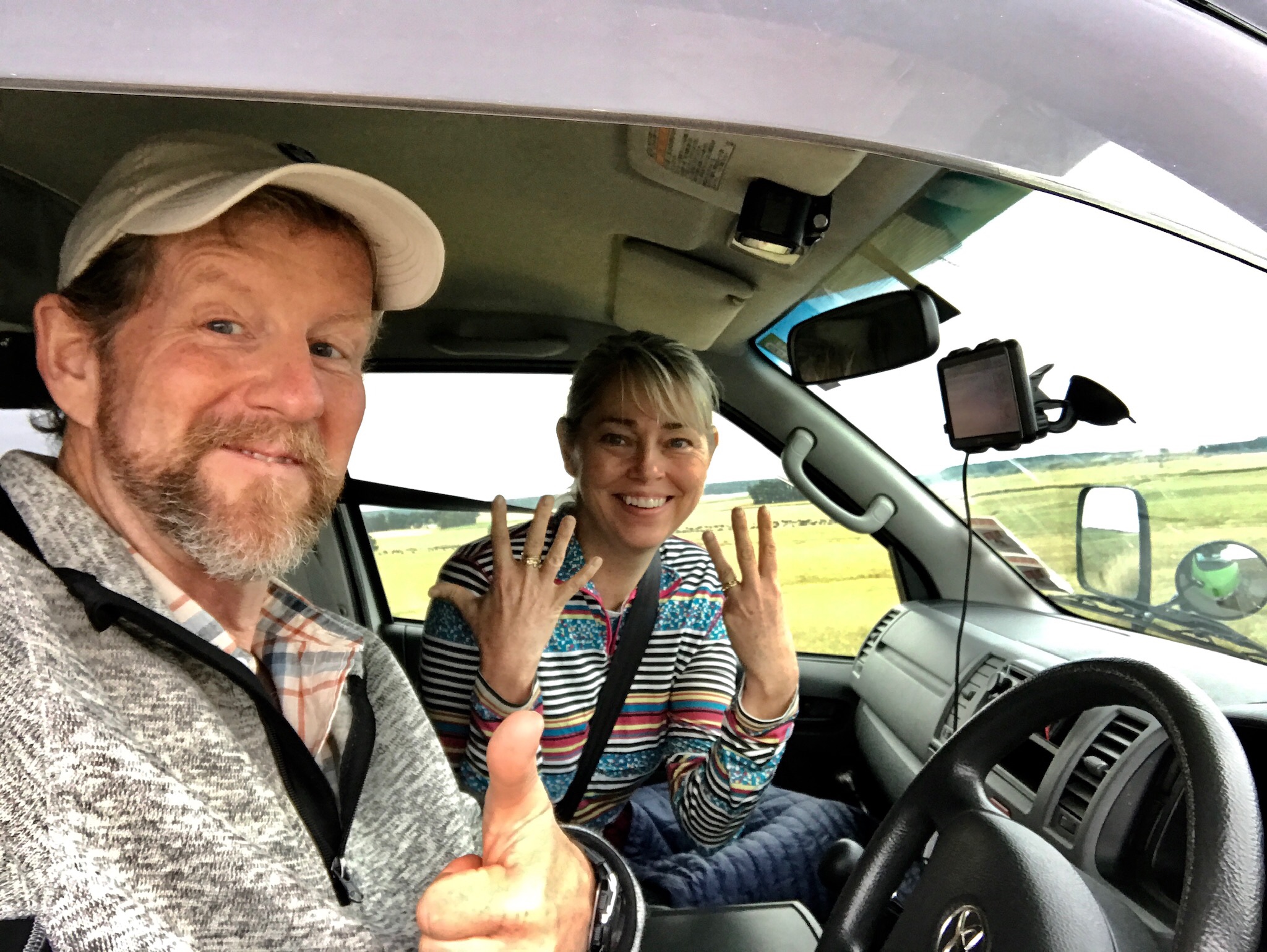 Closing in on our final night on the road, Phoebe waved us off from the porch of her office as we hit the gas to climb the hill out of camp. Our bed hadn’t gotten any more comfortable, our sink still wasn’t draining, but we were beginning to get a sense of the beauty of a campervan holiday. People and places, when you choose good ones, have everything to do with it. And we were getting better at the choosing. Which is why we decided to wing it on our final night by renting a driveway. Yes, a driveway my American friends. You can rent such a thing here. Phillip and Meghan’s driveway had great reviews, so we swung south and ended up parked on the top of a hill next to a dairy farm and a garden full of edible flowers.

We stayed up late enjoying each other’s company and glasses of whiskey, got the perspective of a dairy farmer on the state of the industry in New Zealand, and talked cars. The next morning, they sent us off with a belly full of pancakes and a promise to stop in when they go 4-wheeling around the world. Oh, and a suggestion to try naturalist campsites. Just in case the current campervan experience hadn’t pushed me well out of my comfort zone.

Day 8. The Jucy returns to the stable. We arrived back to Wellington tired, a bit smelly, and totally satisfied with this trip. I wouldn’t say that we went from survive to thrive, but we learned a lot, met some wonderful people, and got out into it, as we had hoped. New Zealand was generous to us as we adjusted to campervan life. If this is, in fact, our last camping trip, as we often alluded to on the road, we got it right in the end.

Susannah teaches Language Arts at Cape Cod Lighthouse Charter Public School. She received a Fulbright Distinguished Award in Teaching to travel to New Zealand in 2019 to study the teaching of history and colonization in New Zealand's schools. View all posts by susannahremillard4244

Views of Susannah Remillard are expressed on this site and do not represent the Fulbright Program or the Department of State.